Musical set theory groups objects at multiple levels of detail: from the lowest level, with tens of thousands of playable chords and scales, to the highest level, where every possible chord or scale can be grouped into around a hundred elements.

Modern musical set theory terminology allows us to remain exhaustive, yet to proceed without ambiguity, while capturing the richness inherent in centuries of western music theory. (This section is based generally on Callender, et al., 2008.)

Answering Q1 (How many chords & scales?)

Annoyingly, there is no way to count some type of object without knowing exactly what type of object we are counting. We will clarify the terminology used for the levels of detail discussed to group clock diagrams together in the previous section, where we found the lower bound answer, 115, to how many possible 3- to 9-note chord and scale objects there can be (Q1).

In this section we will start with that lower bound of 115 rows (of one to four set classes) and show how to get chords and scales that can be played on an instrument. We will go from black and white clocks back to colored clocks (unordered collections of notes), then on to named, playable chords.

If you can count, you can understand these simple equivalence relationships, which work for both chords and scales, treated uniformly as “musical objects.”

Here, equivalence relationship just means “when the equivalence rule is applied, we consider this group of objects to be one set, to have one identity, to be on the same team, so to speak.” A chord or scale may be part of many groups, depending on the level of detail being discussed.

Continue reading below for examples of all of the equivalence rules listed in the table, where the following abbreviations are used:

Row of Set Classes Table: just over a hundred possibilities

Each row of the Set Classes Table groups one or two Forte codes (one to four clock diagrams) since they have the same Lewin-Quinn fourier components.

In this example, each black and white clock groups 12 colored clocks (pitch class sets) so this row encompasses 48 OPC-equivalent objects.

All 24 major and minor triads are treated as equivalent, and they have the same Lewin-Quinn fourier components and interval-content vector, and evenness. 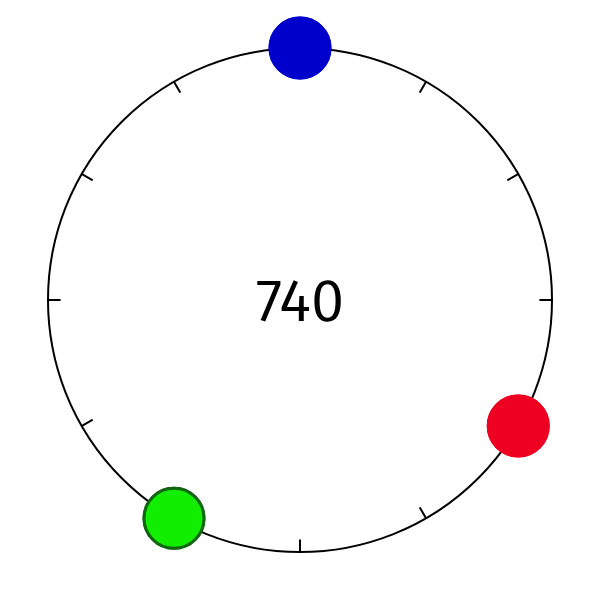 All transpositions of the major triad are considered a single object, no matter how many times each note appears, or in what order.

We saw in Clocks & Pitch Classes that 4,096 colored clock diagrams capture this distinction.

MATCH: tens of thousands of possibilities

Two voicings of C Major on the right are not OC-Equivalent to one another since the first one with an E in the root is in First Inversion.

Harmonious catalogues different chord inversions and modes of scales by pairing a colored clock diagram (pitch class set, an unordered collection of notes) with a root note, for example C Maj, C/G, D Dom 7, etc. This is a common way for chord charts or lead sheets (in Jazz fake books, or pop song write-ups with lyrics and chord names) to represent the harmonic structure of a piece, leaving the work of where to play the chord or how to voice it to the instrumentalist.

Converting an OPC-Equivalent object (e.g. our running example, the unordered set of notes C, E, G) into every possible mode or chord inversion is an involved process. Many chord bibles do this manually, listing ways to play given chords based on the author’s memory or personal experience. Some online chord resources use a cleverly-crafted algorithm to generate every possible way to play a given chord (for example, taking the note names and generating finger positions on the fretboard, even when these are sometimes unplayable).

Harmonious combines both approaches, starting with an exhaustive, heuristic-driven list generated by a computer, then manually filtering and curating it, leaving chords and scales playable and understandable by human beings with five-finger hands. After completing this process, looking up OC-equivalent ways to play a given chord in Harmonious is as simple as entering the notes of the chord into the interactive key search or interactive fret search and looking under the heading Match.

Reducing the Numbers and Focusing More

The next section will take a high-level view of easy-to-understand trends in the set classes and introduce a simple way of eliminating objects that are less useful (the concept of chromatic-cluster-containing versus cluster-free), while preserving all the chords and scales of jazz theory and reducing the number of OC-Equivalent chords and scales Harmonious will focus on from hundreds of thousands to tens of thousands.