What if evenness is just one important aspect of set classes? What about other aspects, such as consonance? Or other quantitative ways of measuring relationships between musical objects, such as voice leading distance? Are they connected?

The orbifold (Mazzola 2002, Tymoczko 2011) is a single mathematical space arranged around a central pole of perfect evenness, just like our circular plot of set classes arranged by evenness radiating out from a perfectly even center (like the target on a dart board).

Pitch class sets of a single cardinality C live in each C-dimensional orbifold. Moving by one or more steps in the space is just voice leading, and the distance moved corresponds to voice-leading distance in semitones. This is a continuous space that captures every tuning system, but we can visualize the notes in 12-TET within it by picturing a lattice. The outline of four cubes touching at the corner (shown with heavy black lines) is shown here at the center, lying in a straight line along their long diagonals. 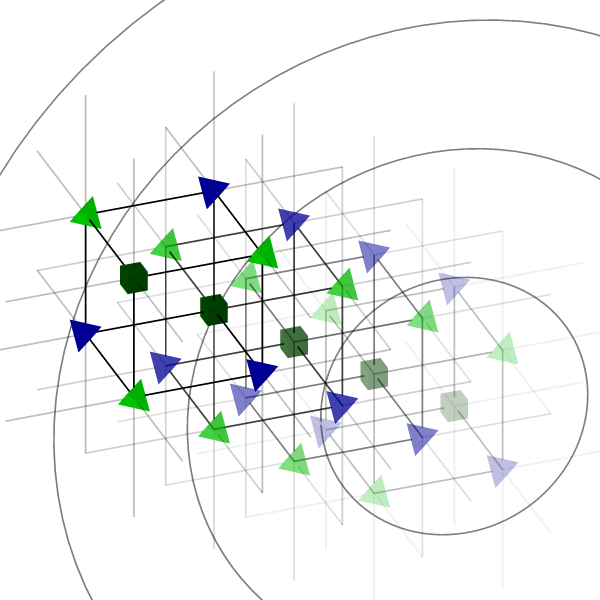 When projected flat, this space reminds us of our “dart board,” with nearly even chords (major triads and minor triads, marked with triangles) surrounding the augmented chord “target” at the center.

A line of perfect evenness (the center of the target) goes through the green cubes (the four transpositions of the augmented chord). The first and last augmented chords are the same chord here, because the space also repeats after each octave. (Within the span of the four cubes, there is also one 120º twist, unillustrated.)

Chords of the same chord type lie on circles a given distance from the center (equal to their minimum distance to the augmented or perfectly even 3-note chord, our measure of evenness). Toward the edge of the space we hit a mirror, a 2-D wall of every transposition of the intervals.

It may be reassuring to remember that all chords of all cardinalities are related to all other chords by some number of voice leading steps (Tymoczko 2006). (We can compute the shortest voice leading of two pitch class sets using the algorithm from that paper.) In fact, there is actually one impossible-to-imagine nine-dimensional space that includes each orbifold within it. This 9-D hyperprism has eight-dimensional walls equal to the 8-D orbifold, with 7-D walls, and on down to a 5-D orbifold with 4-D walls. A chain of beautiful 4-D tesseracts live within the 4-D space (see Tymoczko 2011, section 8.5) which has its own 3-D orbifold walls, pictured above. This 3-D space has 2-D walls, each a Moebius strip. The 2-D orbifold (a twisted plane containing all intervals of every tuning system) has 1-D “walls” or rings equal to the pitch class circle. 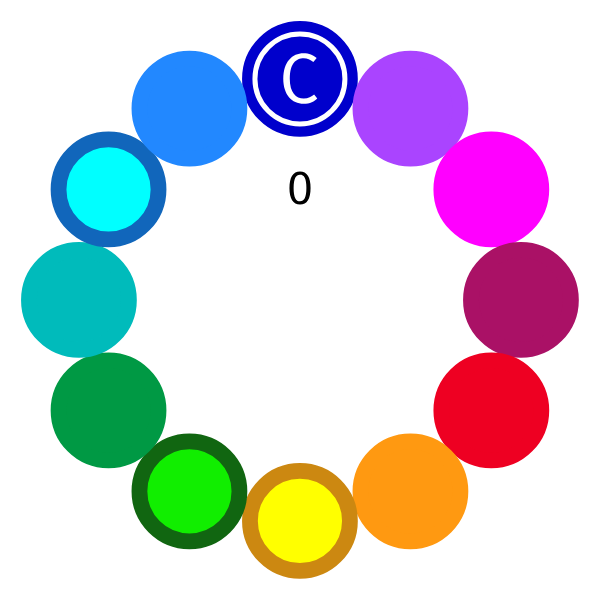 An important consequence of voice leading is that chords (and scales) that are more even (as long as they are not modes of limited transposition) are related to their own transpositions and involutions by short distances. (In fact there is a strong correlation between evenness and short voice-leading distance across all set classes.)

Finally, we have seen that the common chords and scales live near the center of the space(s). These nearly even chords and scales are also precisely the most consonant set classes of each cardinality (Tymoczko 2011, §2.10). Past composers may have chosen (or been strongly encouraged to use) chords and scales based on how easy they were on the ear, but they were also playing the short voice-leading-possibilities game and near-evenness game simultaneously whether they knew it or not.

The next two sections will pose some simple riddles to get you thinking about evenness and scales.